A first half Anthony Edgar goal on his Bay debut and another after the break from Ryan Cooper brought Chichester's run of four games unbeaten to an end up in North Kent. 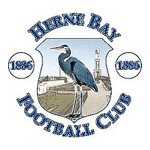 The hosts came into the encounter on the back of an eventful 3-2 win in Guernsey, scoring three times in the last five minutes of the first half. They’d lost narrowly to Burgess Hill before the trip to the Channel Islands but that defeat to the Hillians was a first loss in seven in a spell where Herne Bay have made a push towards the play-off spots.

There was one change to the Chi line-up that started against East Grinstead with Gicu Iordache coming in for Kaleem Haitham.

It was the visitors who dominated the ball in the early stages, as Herne Bay struggled to get any rhythm to their play.

And Chichester created the first opening of the game through Iordache but his deflected effort failed to trouble keeper George Kamurasi, who has recently featured between the sticks on Sky Sports’ morning show Soccer AM.

City pressed for the opener and Lloyd Rowlatt played in Josh Clack down the wing and the No.7 looked to pick out Rowlatt with a dangerous cross only for the Herne Bay defence to get in a vital interception.

Iordache tried his luck from distance once more but the Romanian couldn’t direct his shot on target.

For all Chichester’s possession it was the hosts who made the break through against the run of play on 17 minutes.  Kamurasi launched the ball forward and Edgar, a product of West Ham’s academy, latched onto a rather fortuitous flick from Zak Ansah and drilled a composed drive across Steve Mowthorpe which nestled in the bottom left corner.

The away side looked to get back on level terms when a fluid attack resulted in a Scott Jones delivery which had to be well defended by the Bay back-line.

Captain Connor Cody then had a couple of efforts on the edge of the box but neither forced Kamurasi into a save.

At the other end Mowthorpe had to be quick off his line to smother a loose ball after some shaky defending in the Chi rearguard.

Edgar almost got a second as a delightful ping from Dan Lawrence sent the winger down the left flank. He tried to emulate his earlier goal with a low cross goal shot but it drifted inches past the post this time.

Chichester squandered a couple of opportunities before the break. First, Rowlatt swung in a corner that Cody’s outstretched leg could only divert over from close range. Then Clack cut in down the flank onto his favoured right foot and curled an effort wide.

There was a shaky start to the second half for Mowthorpe who sliced a kick out to touch but he did well to then claim a dangerous Bay corner.

Cody won City one of their own which Matt Axell swung in. The ball fell to his midfield partner Jamie Horncastle on the edge of the box whose attempt was quickly charged down.

Iordache then had a wild shot fly well wide as Chichester, who have been scoring freely of late, continued to fail to hit the target.

Bay were far more dominant in the second half and looked particularly threatening down both wings with Kieron Campbell and Tushaun-Tyreese Walters. Hutchings picked up the first yellow as a late slide tackle on Walters prevented a promising counter attack for the hosts.

Herne Bay doubled their lead in the 67th minute after Walters caused problems and fed Cooper who was available on the overlap. His drilled low cross somehow eluded everyone and crept into the bottom corner.

Chichester had a chance to reduce the deficit but Jones’ tame shot was straight into Kamurasi’s arms after Rowlatt had played him one on one.

At the opposite end Campbell struck a fine shot just past Mowthorpe’s goal.

And the City keeper had to be alert moments later to come off his line to thwart both Edgar and Ansah.

Rutherford rung the changes across the final 20 minutes with George Cody, Haitham and Emmett Dunn making appearances in the place of Hutchings, Iordache and Horncastle.

A strong Herne Bay finish proceeded as they searched for a killer third.

Ben Pashley was caught on the ball by Ansah and the Bay man, on a streak on six goals in seven, raced through but his shot cannoned off the woodwork.

Ansah had a chance to get on the scoresheet once more in the 90th minute but Mowthorpe pulled off a great diving save to tip the ball round the post.

Campbell was next to force a save out of Mowthorpe which the shot stopper spilled but substitute Chris Saunders could only blaze over the rebound.

Haitham was then disposed in a dangerous area and Tom Carlton drove at goal and fired a powerful shot at Mowthorpe’s near post but again the keeper was determined not to concede a third and he turned the ball behind for a corner with a strong hand.

Chichester won a set-piece in time added on and Kamurasi was finally called into action, with what would prove to be the last kick of the game, getting down low to his right to deny Clack and protect his clean sheet.

The defeat sees City drop down to 11th place in the league at the mid-way point of the season.