Chichester City have won two awards that recognise the achievements of non-league clubs in the FA Cup.

Chi’s match at the weekend against Haywards Heath was called off but they did have something to celebrate when captain Connor Cody and teammates Corey Heath, Josh Clack and Emmett Dunn accepted two FACTAs on behalf of the club from David Bauckham who was short-listed for ‘Best Non-League Content Creator’ at the Football Blogging Awards, 2019.

The FACTAs are the only awards dedicated to the FA Cup accomplishments of non-league clubs.

Chichester won the 2019-20 ‘Surprise of the FA Cup’ award for their remarkable run through six rounds of qualifying to become the first team for 70 years to progress to the second ‘proper’ round after beginning the competition in the extra-preliminary round.

They also polled the most votes for the ‘Special Team Award’ following their gesture to donate some of the FA Cup first round prize money to a future Bury FC phoenix club after receiving a unique first round bye. 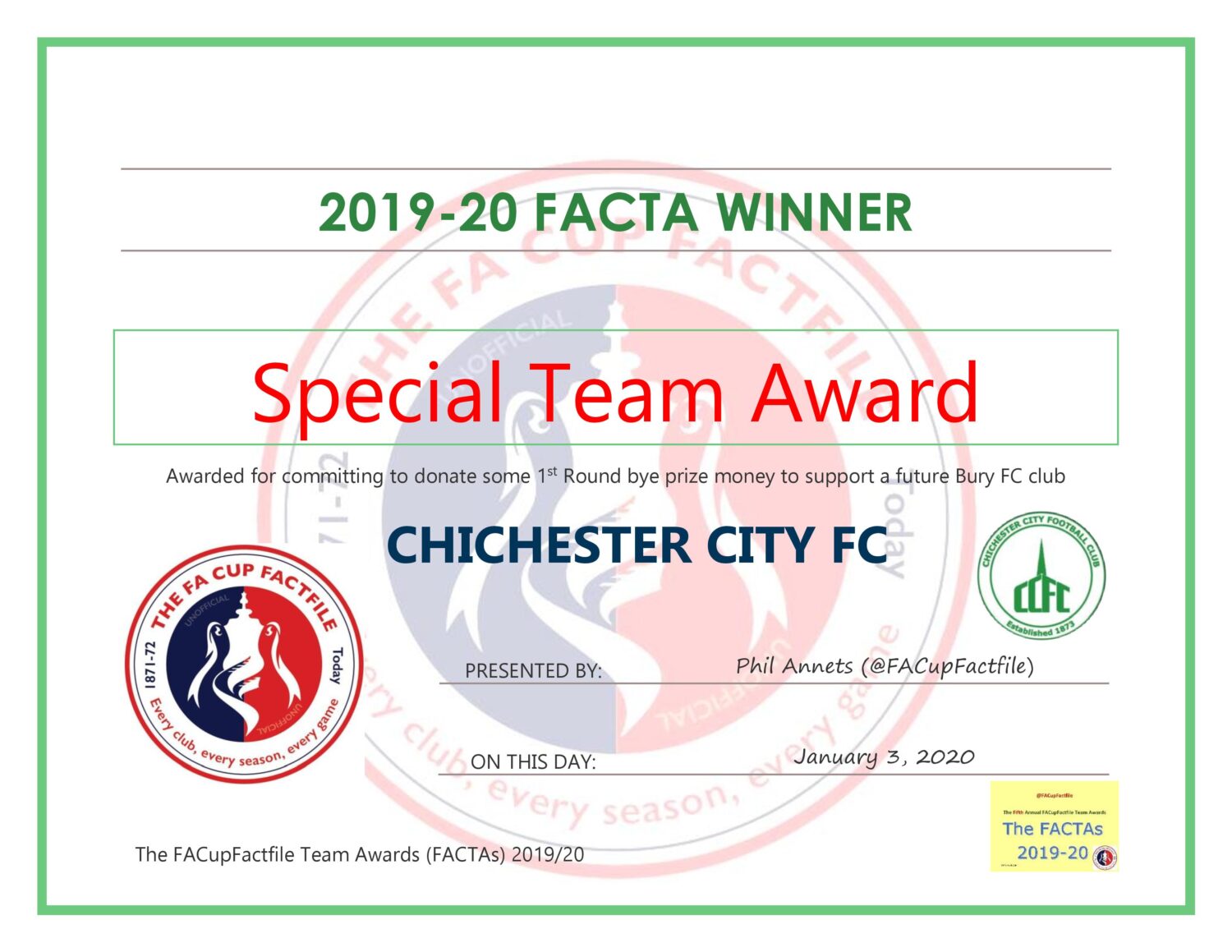 The other teams nominated in the first FACTA category were Abbey Rangers, who got through four FA Cup rounds having never won an FA Cup tie before in their history; Colne, the first side from the Lancashire town to ever reach the fourth round of qualifying; and Walthamstow who upset Great Wakering Rovers and Aylesbury United.

Phil Annets of FA Cup Factfile travelled to Maldon & Tiptree to present the other two awards – ‘Performance of the FA Cup’ for the Jammers’ win away at Leyton Orient, and ‘Team of the FA Cup’ for making the second round ‘proper’ for the first time in the club’s history.

He said, “FA Cup Factfile is the most comprehensive FA Cup facts and stats blog and Twitter account.

“The FACTAs were launched in the 2015-16 season to recognise the achievements and performances of non-league clubs in the FA Cup.

“Non-league clubs represent over 87% of the clubs that compete in the FA Cup each year but their contributions to the success of the competition are usually minimised or forgotten by the time the third round comes around, and especially by the time we reach the final. Clubs are nominated for each award via fans and Twitter followers and then a shortlist is generated of nominated clubs. The winners are determined by thousands of public votes combined with expert non-league and football panellists’ assessments. The experts this year were myself, Caroline Barker (TV football presenter), Dave Anderson (experienced non-league manager), Tim Fuell (presenter of The Non- League Football Show podcast) and Matt Badcock (editor of The Non-League Paper). 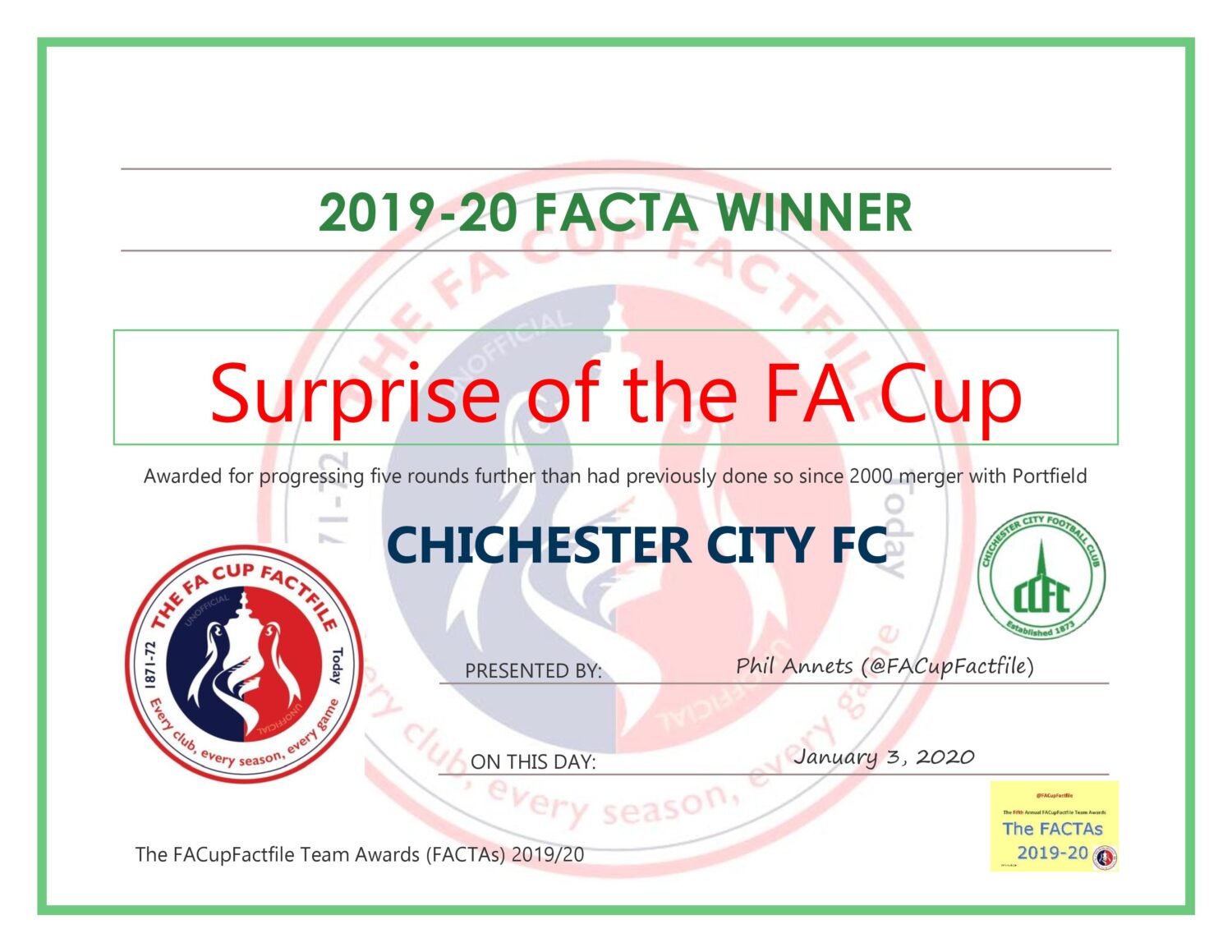 “Chichester City won ‘Surprise of the FA Cup’ for their historic exploits after advancing to the ‘proper’ rounds of the competition from the extra-preliminary stage. They also won the ‘Special Team Award’ – awarded for the club’s commitment to share some of their FA Cup first round prize money with a future Bury FC club whose expulsion had caused the bye to happen.”

Chichester are hopefully back in Isthmian league action on Tuesday 4th February at Three Bridges (Kick Off 7:45pm). Three Bridges picked up an important three points in Kent on Saturday when they beat Ramsgate. Chichester spurned a number of chances in the reverse south east division fixture with Bridges at Oaklands back in September and lost 1-0.