The club is pleased to confirm Gary Clarke as under-18 manager who has today released details of the individuals who will be supporting him in the role.

Clarke will manage and also coach the under-18s during the upcoming season. A UEFA B licence coach he brings a wealth of football knowledge to this role.

He will be supported by the extensively experienced Mark Hudson who will act as Assistant Coach. Joining Clarke and Hudson will be University of Chichester student Andris Altsaar who is going into his final year studying BSc (Hons) Football Coaching and Performance at the university and will act as the team’s Lead Performance Analyst while also supporting the coaching and development of the players.

The club will soon be holding trials for players wishing to be considered for the under-18 squad for next season. To register interest please contact Gary Clarke via email at gsclarkey83@gmail.com or 07540314595. 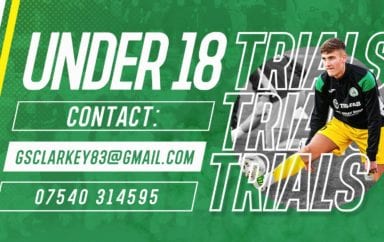