Lancing grabbed a winner with 15 minutes to go to condemn former county league rivals to a second pre-season defeat.

Chichester, without Scott Jones, Gicu Iordache and Lloyd Rowlatt, made changes to the starting XI that faced Brockenhurst at the weekend. 17-year-old Ethan Prichard featured in the front three with Josh Clack and Kaleem Haitham; Corey Heath returned to central defence alongside Ben Pashley; captain Connor Cody slotted in at right back opposite Rob Hutchings on the other side; and Jamie Horncastle and Matt Axell teamed up with summer signing Ryan Penny in midfield.

The visitors started brightly and their first attack down the left ended with Clack crossing just too deep for Penny who had made up good ground.

Then a nice turn by Prichard allowed him to find Haitham. The tricky winger eluded a couple of challenges but couldn’t get a shot off.

Penny and Clack linked up effectively next and the hosts’ keeper did well reach the ball ahead of Prichard who was offside anyway.

Horncastle picked out Hutchings with a super pass only for a defender to clear his cross.

A nice move by the hosts led to an attempt that sailed over Steve Mowthorpe’s bar in the 13th minute and then moments later Pashley got in a great tackle to deny Lancing and Horncastle tidied up the loose ball.

At the other end Clack’s classy first touch gave him an opportunity. A defender however managed to get a block in as Clack delayed shooting.

Chi might have gone ahead on 18 minutes when Axell’s volley flew inches over and then lovely play and a cut back from Prichard set up Cody for an effort that crashed down off the woodwork and bounced away.

Mowthorpe was called into action in the 23rd minute when the Lancers broke swiftly down the left before Penny wasn’t far away at the other end.

Two opportunities came and went either side of the half hour mark for the Step 5 team – first a shot on the turn fizzed wide and then Mowthorpe pulled off another fine stop.

Haitham was clipped on the edge of the box next and Clack’s set-piece cannoned back off the wall.

Chichester headed an effort off the line some eight minutes or so before the break and Haitham and Hutchings both had attempts blocked.

Lancing threatened late on when Mowthorpe got behind a cross-cum-shot and Conrad Honore couldn’t find a finish after the slickest move of the first 45.

Emmett Dunn, who scored the only goal of the game when the two sides last met at Culver Road in the 2018-19 season where Chi won the league and promotion to Step 4 for the first time in their history, and Rory Biggs came on for Axell and Penny at the interval.

Haitham caused problems in the opening stages and two shots were diverted for corners.

A decent Lancing chance flashed past Mowthorpe’s upright in the 55th minute and then the Chi No.1 gathered a low effort from distance.

Ryan Peake and Flori Vucaj replaced Pashley and Horncastle just before the hour and the scorer of Chichester’s late consolation up at Tranmere in the second round of the FA Cup turned the ball out for a corner after Cody was dispossessed.

The Lancing keeper raced off his line to head away a pass intended for Prichard before nice skill from Dunn set up a shot that was dealt with easily enough.

Chi huffed and puffed but struggled to get anything going and were second best in the second half to a side that topped the SCFL premier division when the 2019-20 campaign was suspended in March.

Mowthorpe saved a free-kick on 68 minutes after a foul by Vicaj just outside the penalty area and then denied the Lancing right back from close range.

Heath got a talking to from the referee for a heavy challenge just before the hosts grabbed the only goal of the game when Peake was caught out and Michael McEnery latched on to a measured through ball and rifled his shot into the back of the net.

McEnery might have added a second with five minutes to go but lifted his effort over.

Next up for Chichester is a Dave Kew Memorial Cup third/fourth place play-off match against Selsey at Pagham on Saturday 22nd August. 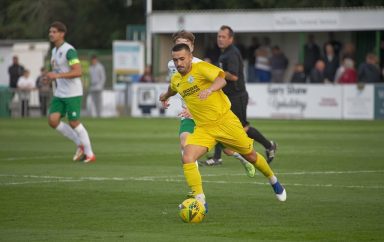 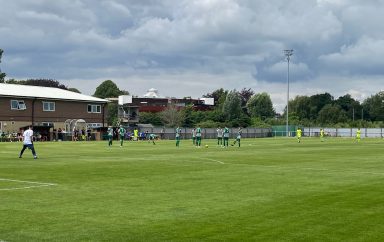