Chichester looked to be heading for a mid-season friendly win against Worthing, in this the third meeting between the two sides in four months, but the Isthmian premier division leaders grabbed a last-minute equaliser.

Josh Clack put Chi ahead from the spot in the 6th minute, as he’d done in the last fixture at Oaklands Park before the latest lockdown when Chichester beat Saltdean in the Sussex Senior Cup.

Gicu Iordache doubled the hosts’ lead on 65 minutes after Chi keeper Steve Mowthorpe saved a Worthing penalty earlier in the second half but Alex Parsons pulled one back for the visitors in the 73rd minute and Mo Diallo made it all square late on for a repeat of the pre-season score-line in September when the Rebels similarly came from behind to share the spoils.

City youngster Theo Bennetts, who captained the U23s in an impressive 6-0 win over Pagham at Oaklands midweek, got a deserved place in the starting XI alongside first team regulars. Ryan Davidson at right back; Ben Pashley on the other side; and Corey Heath and skipper Connor Cody lined up in the back four with Lloyd Rowlatt, Kaleem Haitham, Iordache and Clack ahead of holding midfielder Bennetts and a fit again Callum Overton up top.

Chi created the first opportunity after only two minutes as nice work from Iordache allowed him to play Haitham in down the left who couldn’t quite lob Worthing keeper Roco Rees.

The visitors forced a corner in the next attack. Heath got in a good block and the ball came out to Jesse Starkey but he blazed his shot over Steve Mowthorpe’s bar.

The hosts were awarded a penalty when Clack was upended after a slick move involving Davidson and Overton. Clack picked himself up and beat Rees down the middle to give Chichester an early lead.

Next Mowthorpe gathered a cross from the right and Haitham’s attempt to catch Rees out at his near post crashed into the side-netting.

Alfie Young was given a yellow card after he caught Haitham and Rees did well to get to Iordache’s resulting free-kick that deflected off a defender.

Chi had a series of corners to deal with and Ollie Pearce dragged an effort wide from one of these before Ricky Aguiar fired inches over.

Overton, who bagged a hat-trick last time out for the U23s and in his first senior team start after a year on the injury list, was impeded and Rowlatt picked out Cody with his set-piece only for the captain to glance a header just off target.

At the other end Pearce nearly got in but Mowthorpe was quickly out to beat the Worthing No10 to the ball.

The visitors then hit the woodwork and Chi managed to hack the loose ball away.

Worthing spurned two great chances on the half hour mark – one an acrobatic overhead attempt from Omar Koroma.

Under heavy pressure, Chi had defending to do.

A shot from distance just fizzed past the post before Mowthorpe made two fine stops to deny, first Aguiar, and then Koroma.

Pashley held off his opponent effectively and steered the ball out for a corner that Mowthorpe gathered at the second time of asking when it was played back in.

The Chi keeper then had another fierce drive to save from Jasper Pattenden on the stroke of half-time.

Worthing made multiple changes at the break with Chichester bringing on Rob Hutchings in his familiar left back position and Cody and Pashley switching defensive roles.

Cody, now at right back, defended well to snuff out the danger as Worthing probed down the left flank.

Mowthorpe was forced into another decent save some ten minutes in and then got down low to deny Pattenden from the spot after Marvin Armstrong was fouled in the box.

Pashley and Heath were both called on moments later to tidy up attacks and against the run of play Iordache scored Chi’s second, smashing the ball into the back of the net from close range as he capitalised on a calamitous pass across goal by a defender.

The momentum swung back in the hosts’ favour for a spell as fifteen-year old Joe Masters, sixteen-year old Dan Gogu and seventeen-year olds Jack Moth and Jack Farrier joined the fray.

Haitham lifted an effort just over following a super pass and exchange with Iordache before Masters crashed one against an upright.

Iordache appeared to be tugged back in the penalty area in the 71st minute but the referee wasn’t interested and seconds later Worthing were back in it when Parsons latched on to a rebound after a nice move.

It might have been 2-2 in the visitors’ next attack but for another good save by Mowthorpe who got to a looping header.

And then a Bennetts rocket was somehow palmed away by Rees before Rowlatt also pulled a smart stop out of the Worthing No1 with a cracking shot that Rees turned round his post.

Diallo equalised when the away side countered – a cross from the right was headed back into the six-yard area and the Worthing sub swept the ball past Mowthorpe.

There was still time for chances at either end but Haitham’s shot was blocked and Mowthorpe managed to get down low once again to an effort. 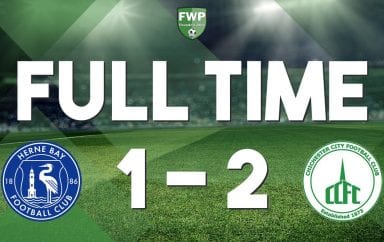