In this edition, It's the turn of combatative midfielder Mikki Collins.

“Have you ever tried concentrating in a Teams meeting whilst hearing a paddling pool fill up in your garden?!”

Tell us a bit about your job and how lockdown affected it.

“I think it’s safe to say that everyone is over COVID! I don’t think anyone anticipated the country being in lockdown nearly a year after the first 3-week lockdown in March 2020.

I work for the University of Chichester in the Marketing Department as a Digital Content Producer. I was easily able to transition from working in an office to working from home in March due to my job being solely online focusing on student recruitment via digital content and social media, however I didn’t anticipate the mental side of working from home.

One day I’m in an open plan office surrounded by 25 colleagues bouncing creative ideas off each other in a fast-paced working environment to suddenly be working in my kitchen on my own. Staying motivated to keep fit or even just leave the house for a walk was a challenge at times, but I’m very lucky to live with 4 other people as we were able to lean on each other for support and motivation. My housemates at the time were all secondary teachers and they, even though they’ll deny it, DEFINITELY soaked up the sun in the garden for 3 months whilst I was slaving away at my desk inside all summer – have you ever tried concentrating in a Teams meeting whilst hearing a paddling pool fill up in your garden?!

Although it felt like I was constantly treading water with my job having to adapt to everything COVID was throwing at us – I’m actually really grateful for this last year. It’s been extremely hard at times, but it gave me a completely new outlook on what’s actually important (woah, deep). I found myself with an abundance of time to learn exactly what I wanted, to prioritise my mental health and know exactly who I wanted to be surrounded by once it was all over.

I hadn’t played football in a couple of seasons due to voluntary media commitments to other football teams, but after the first 4 months of lockdown all I wanted to do was get back playing. I jumped at the chance to trial for Chichester City Women FC in July 2020 to a) have an outlet of working from home and b) realise I’m happiest when I’m playing football competitively!

It’s so great to FINALLY finish our on-again off-again season. We definitely found our rhythm just before Christmas playing exciting football and we’ve certainly continued that through the last stretch of this season. We are all so grateful to be able to continue our season with so many friends in different leagues having theirs cancelled”.

How did you start out in football?

I grew up in South London, near Wimbledon and I’ve been playing football since I was 5 but started playing for a team at 10. I convinced my parents to let me play for a team, and there was a free league just around the corner. Football has always been a massive part of my family, my nan is still a Fulham FC season ticket holder at 90!

The free league I joined was for ages 10-14, so I was up against 14-year old’s mostly, I think I got my strength through that. When you’re that young playing against that kind of age, obviously there wasn’t enough girls to split up the age groups, to play at 10 years old against somebody nearly turning 15 was pretty mad.

I stayed in that same league until I was 14, then through some school tournaments, I played with players who were playing in couple of Sunday league sides and was asked if I wanted to join. The league I played in was coming to an end, so I went into Sunday league. I feel like I got into an actual team quite late on, I joined AFC Wimbledon at 14. As a team, it made sense for us to join another club because they had an actual women’s setup, so at 15 and 16, we had somewhere to progress to.

I think that was the downfall in a lot of the teams I played for, there wasn’t much to progress on to whilst staying within the same club and I think that’s the great part of Chichester City. We’ve only been set up for a couple of months – we already have two youth teams and a senior team, and I know this is just the beginning which is really exciting and crucial for young player development.

I also played for a team called Victoire FC, and we got paid to play! There was a local businessman who absolutely loved women’s football, and he paid us £10 for training, and £20 for matches. So, I was 17 and getting £30 a week to play when I don’t think many women were getting paid to play at all. This is the team where I learnt the most, I was the youngest by about 10 years and they were a very physical side.

I definitely still have the elements I learnt from that team in the way I play now. It’s great to now be one of the older players and help the younger players in the team the same way that I was helped! I started as a student at the University of Chichester at 18 and played a high standard of football with them which was an incredible experience, we were even number 1 in the UK for Futsal at one point! This is where I got involved with the original Chichester City Ladies team as a player.

I moved into a marketing role with the university which I’ve been in for 3 years, and that made me want to get into the social media side of football, and that’s when I started doing the social media side of Chi City Ladies. I found juggling playing with a full time job was quite hard, and as the players were younger than me they had a lot more time, I felt it was time to take a step back from playing and work for a team that I liked and were at a high level in an area that could benefit both me and the club.

And now you’re back at the City for a second time.

After two seasons of not playing I wanted to start playing again, and I already knew Connor Slade who was putting together a new Chichester City Women’s setup. The team has bonded so quickly, and the coaches are so dedicated. From the get-go we’ve got 6 coaches, and everybody wants to be here, and as cliché as it sounds it made me fall in love with playing football again. Its not taken that long to work out everyone’s playing styles and I’ve been helped by the fact I’ve played in sides with Gaby Hobday and Lauren Ellis for years and that shows because I pick out Gaby with a lot of my passes.

Having dedicated coaches who put on quality training sessions to put their ideas across on how they want us to play has kept us motivated, and a great spirit within the team will help us if we go through some tough times and continually progress the club. 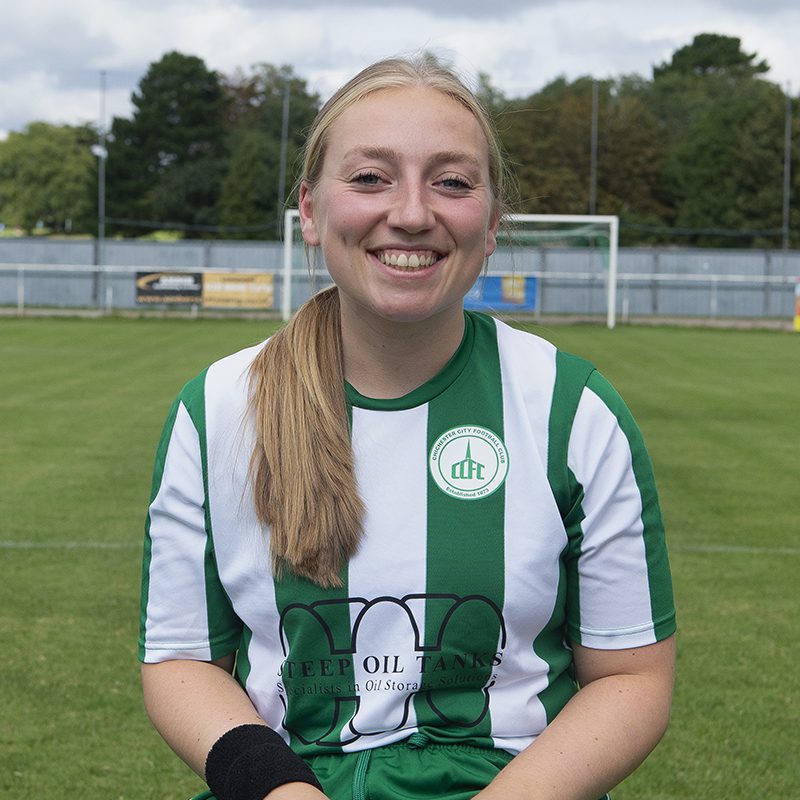