Vickers condemned Chi to a heavy opening day defeat at Oaklands Park thanks to first half strikes from Malachi Hudson and Marcus Elliott and Anthony Adesite’s third goal less than sixty seconds after the break in a match marred by unsavoury scenes in a post-final whistle fracas between players and supporters fuelled by reportedly racist remarks. 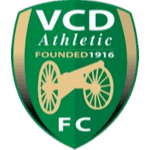 There were three changes to the Chichester starting XI that featured against Bognor in the club’s last pre-season friendly with Scott Jones, Ryan Davidson and Lloyd Rowlatt all returning. Davidson lined up with fellow defenders Rob Hutchings, Lewis Hyde and Ben Pashley in front of Ryan Young. Rowlatt joined skipper Jamie Horncastle in the middle of the park alongside Emmett Dunn, with Jones and Gicu Iordache either side and Callum Overton up top.

The south east London team beat Chi 4-1 in the Covid curtailed 2020-21 campaign. Hutchings gave City an early lead in that game at Crayford against, at the time, unbeaten table toppers but Adesite levelled and added a second later on as three goals in 10 second half minutes undid Chichester. It was a different story the year before as Chi recorded their first Step 4 league double with an impressive 3-0 win away and a 2-0 victory at Oaklands.

Here both sides cancelled each other out in a cagey 15 minutes or so where Iordache became the first player of five to pick up a card from James Robinson.

Hutchings fired a long-range effort high over the bar and Rowlatt pulled a shot off target moments before Hudson broke the deadlock in the visitors’ first genuine attack driving into the box and beating Young despite a teammate’s desperate attempt to clear on the line.

The hosts sought to respond and Young’s counterpart Sam Mott flapped at an Iordache cross under pressure from Jones only for the resulting corner to be headed comfortably away at the front post.

Mott then got something on Hutchings’ free-kick following Chris Edwards’ hand-ball and Vickers broke swiftly but Young, with Elliott threatening, managed to smuggle the ball away for a corner which fell to Ayman El-Mogharbel who skewed an attempt wide.

Elliott joined Iordache in referee Robinson’s notebook before lovely play by Rowlatt and some trickery from Chi’s Romanian No10 teed up Overton for a drive that was inches the wrong side of the post.

And then Jones was bundled over heavily in the penalty area only for the Sussex side’s appeals to be dismissed.

Elliott doubled Vickers’ lead on 28 minutes after getting in between the centre backs with a burst of pace and tucked the ball beyond the outstretched Young.

The hosts lost Davidson on the half hour mark and Cody, who replaced him, was soon in the thick of things whipping in a delivery that was just too long for attackers.

Edwards and Ashley Probets were booked – the latter for time wasting, before Cody made a superb tackle as Adesite danced into the box.

Next Young recovered well to divert an awkward Pashley back-header out for a corner with two opponents challenging.

Pashley then found Hutchings with a measured pass who won Chi a corner at the other end which came to nothing.

Skilful twists and turns by Hudson on the stroke of half time drew a free-kick on the edge of the hosts’ area but Mohammed Oshilaja’s set-piece was drilled straight at Young.

A poor back pass by Hutchings gifted Vickers an opportunity moments into the second 45 which Adesite gratefully accepted slotting the ball home with ease.

And it might have been 4-0 if either of two players had got on the end of Edwards’ excellent free-kick.

With Chi under the cosh Young claimed a header easily enough and then bravely came out to deny Hudson.

Miles Rutherford & Co introduced Corey Heath for Hutchings seven minutes in and the City sub dealt with a difficult bouncing ball to nod it back to Young.

Cody and Dunn linked up smartly as the home side countered but Mott was able to gather the final delivery.

Hyde then tackled Hudson brilliantly as the Vickers No11 probed down the left flank.

Rowlatt was fouled by Jack Barry on the hour and the VCD centre back got a stern talking to by the ref.

Iordache blazed the resulting free-kick high over the frame of the goal.

Good defending by Dunn then snuffed out the danger posed by a neat exchange between El-Mogharbel and Hudson before Horncastle headed away a Probets set-piece and Pashley got to the ball ahead of Adesite.

In the visitors’ next move Adesite picked out Hudson but his teammate couldn’t get a decent connection.

Ethan Prichard was introduced for Rowlatt with 25 to go and Chi forced Hope into action with the keeper punching clear a corner and taking another cross.

In the 75th minute Horncastle was dispossessed by El-Mogharbel who fed Adesite only for the No7 to shoot into Young’s gloves.

Dunn then got Cody away down the right-hand side. The club captain picked out Jones at the back stick but his header was gathered by Hope.

VCD rang the changes in the last 10 and both Prichard and Iordache went close for Chi with shots narrowly wide.

El-Mogharbel should have added a fourth but dragged his effort across the goal.

And at the other end Hope cut out Cody’s volleyed delivery following a nice combination with Pashley.

Young was booked in the three minutes or so of time added on and only a super Hyde tackle to deny Adesite and subsequent calm defending to tidy up the loose ball kept Vickers out at the death.

Both Chichester and VCD will have consequences to face after the ugly incidents at the end of the match.

Next up for Chi is an FA Cup preliminary qualifying round encounter away at Winchester on Saturday 21st August (Kick Off 3pm). 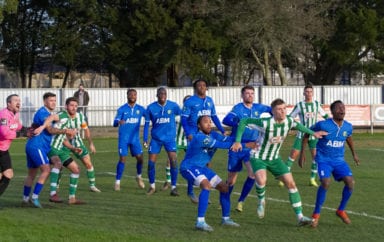