Chichester bounced back to winning ways and put Isthmian league curtain-raiser defeat behind them with this FA Cup preliminary round win against Winchester. 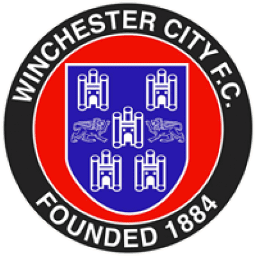 There were a number of changes to the starting XI that faced VCD Athletic last time out in the south east division opener.

Kieran Magee debuted in goal, Connor Cody moved to right back, with Ben Pashley on the other side and Lewis Hyde and Corey Heath in the centre of the back four.

Jamie Horncastle and Lloyd Rowlatt lined up in the middle and Kaleem Haitham, Gicu Iordache and Ethan Prichard offered support for No9 Scott Jones.

And it was the Chi striker who got his side off to a bright start dispatching a trademark header into the back of the net barely two minutes in latching on to Pashley’s in-swinging corner.

It was the Sussex team’s first goal in four matches.

Winchester might have levelled sixty second later when Oli Bailey capitalised on an uncharacteristic Hyde slip and teed up Dan Bradshaw only for Magee to get something on a rasping shot and tip the ball over.

Jones met a Rowlatt set-piece with a header but it wasn’t as good as the one earlier and Chichester then doubled their lead following a frenetic 10 minutes that set the tone for the rest of a match with the visitors and Hampshire based opponents creating regular chances at either end.

Iordache and Haitham played a one-two down the left flank and Prichard finished nicely in the 11th minute.

Rowlatt would have made it 3-0 but for a great stop from the hosts’ No1 Charlie Philpott palming a fierce low drive round his right-hand stick.

Hyde did well to clear Jamie Barron’s free-kick following a foul on Bradshaw by Iordache.

Chi countered through Haitham who fed a pass to Iordache. The Romanian’s effort from distance was blocked and the ball sat up for Cody only for a defender to head his cross away.

At the other end Pashley turned out a delivery from Max Smith and fortune conspired against Winchester when a goal-bound attempt cannoned off a fellow player on the Chi line to Bailey whose cheeky back-heel came back off the post and into the arms of a relieved Magee.

It was one of those days for the home side and just before the half hour mark Olly Balmer, who impressed all afternoon, opened up the Chi defence only to skew an effort wide.

Next Prichard jinked past Kieron Douglas but the Winchester centre back recovered effectively and blocked the 18-year-old’s shot.

Great feet from Balmer allowed him to exchange passes with Jamie Barron only for his effort to get turned out for a corner that came to nothing.

Heath might have added a third for Chi following a slick move involving Haitham, Iordache and Jones but he couldn’t get a shot off after finding space in the box.

Magee saved easily enough from Smith in the 37th minute and then Simba Mlambo headed narrowly wide claiming the Chi keeper had got a touch.

Heath’s heavy challenge on Bailey earned him a yellow card moments before Mlambo should have done better with a free header.

In a first half that was a tale of two cities – Chichester dominating the opening 10 minutes and Winchester the last 10, the hosts forced a catalogue of corners ahead of the interval.

Rob Flooks picked out Mlambo only to head off target before Smith controlled a pass brilliantly but failed to trouble Magee with a shot lacking any real power.

This wasn’t the case in time added on, however, Magee was equal to Smith’s fierce drive and pulled off an outstanding stop.

Balmer had another effort diverted for another corner before Magee punched clear to some extent and blocked the follow-up shot.

And on the stroke of half time Bradshaw dragged an effort wide.

The hosts fashioned the first opportunity after the break when Balmer found Mlambo only for the No11 to fire off target with the outside of his boot.

Chichester lost Hyde five minutes in and Rob Hutchings came on at left back with Pashley moving across.

Barron and Bailey combined and forced a corner with the ball looping over the bar off a Chi defender which Barron subsequently blazed over.

It was Douglas’ turn to shoot next but his attempt was deflected for yet another corner.

The visitors were under intense pressure now, as they had been at the end of the first 45, and Smith’s effort nicked off Rowlatt to give Magee something else to think about and a clever flick by Mlambo settled safely into Magee’s gloves.

Next Heath cleared, although Flooks felt he had been impeded.

Jones got in on a precision pass as Chichester made a rare raid on the hour but his tame shot was gathered without any problem by Philpott.

The away side had a further corner to cope with that Jones headed out to Balmer who lifted his shot high over.

Emmett Dunn came on for Heath and then Prichard was bundled over by Douglas for a caution.

Rowlatt stepped up and picked out Dunn only for Philpott to collect his downwards header.

Horncastle’s lovely hit veered away from goal at the last moment in the 63rd minute.

Iordache lifted one high and wide just before Pashley conceded a penalty on 73 minutes which Balmer converted accurately into the bottom right-hand corner.

With a life-line Winchester pressed to make things all square.

Grange blasted over though, Josh McCormick drilled a cross-cum-shot across goal, and Peel called Magee into action.

A touch of class from Iordache put the game out of reach with seven to go as he blasted the ball home following a super passage of play.

Magee, who had a fine game, claimed a couple of crosses as the clock ticked down and beat Bailey to the ball.

Chi Coach Danny Potter said, “We caught Winchester stone cold at the start of the game with a great set-play. Scott Jones is dangerous in the box and he put his header away well.

Going 1-0 up in so early in the match was good for us. Momentum went our way and we’ll look at the second goal as that’s how we want to play in the final third and it was a lovely finish by Ethan Prichard who fully deserved his goal. He was the youngest player on the pitch for us and he’s really starting to show what he can do.

We knew we were then going to have to soak up a lot of pressure and Winchester started to get into it at the back end of the first half and went in at half time the better team.

We knew they’d come out dangerous in the second half as well but I thought we defended incredibly well. Credit to Kieran Magee who stepped into goal for us – he was outstanding and for the coaching staff our Man of the Match.

Full credit to the back line who defended with their hearts and their heads – Corey Heath, Connor Cody, Lewis Hyde, Ben Pashley and Rob Hutchings and Emmett Dunn when they came on. Jamie Horncastle was outstanding in the middle again.

They got back into it after a mistake by us in the box. Ben Pashley has held his hands up, he dived in when he shouldn’t have done and they tucked the penalty away.

It was interesting as it went 2-1 and the momentum was on their side, but we’ve got one very special player in Gicu Iordache and he came up with the goods to put us 3-1 up and that put the game out of sight with five-ten minutes remaining.

Full credit to Winchester. They’re a really good team with great support and management and coaching staff. We’d like to wish them the best with the rest of their season.

Last week was very disappointing for us. We want to get our heads back on now to what we need to do moving forward.

Being in the cup draw on Monday is a lovely thing for the club, but we know we’ve got two tough league games coming up.”

Chi, who beat Basingstoke in the preliminary qualifying round of the world’s oldest knock-out competition about this time last season at Winchester’s ground, will find out on Monday who they face in the next stage. 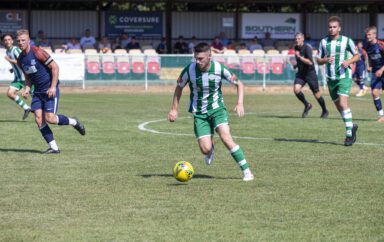