There was nothing between Chichester and opponents Maidstone United, second place in National League South, before three goals after the break from Joan Luque, Christie Pattersen and Roarie Deacon earned the Kent based side a spot in the draw for the next round of the Emirates FA Cup.

Miles Rutherford & Co made just one change to the starting XI that thumped Whitehawk 6-1 mid-week with Tyrone Madhani coming in for Ethan Prichard who picked up a knock in training.

A minutes applause was held before kick off for former City player and manager Nigel Hillier who passed away recently.

Lewis Hyde and Rob Hutchings both had to have their wits about them to make timely interceptions in the opening two minutes and then Emmett Dunn forced Billy Johnson into the first save of the game.

At the other end neat build-up play between Sam Corne and Deacon won the Stones a corner off a super block by Hyde that Regan Booty took and Luque headed just wide.

Chi earned a corner of their own following a Dunn-Ryan Davidson exchange but Hutchings, who scored from the same spot on Tuesday night, hit this one too deep.

Next the visitors got a free-kick after Hutchings fouled Deacon. The ball came back to Booty only for his cross to nick off Gicu Iordache for a corner that Kieran Magee claimed easily enough.

A Madhani set-piece fell to Chi captain Connor Cody but his attempt was blocked just before a slick twist and turn from Iordache allowed him to get a shot off that fizzed over the woodwork.

Hyde then did well up against Alfie Pavey and diverted the ball back to Magee and the Chi keeper parried a fierce strike by Deacon which Hyde hooked out for a subsequent corner.

At the mid-point Davidson got Callum Overton in only for the No9 to shoot inches wide.

Former Wolves player George Elokobi linked up with Jerome Binnom-Williams and Luque in the 25th minute but the Spaniard, who was at the Barcelona Academy, struck the bar with the best opportunity of the opening 45.

Davidson and Dunn headed clear a couple of corners in the next passage of play before Iordache fired into the side-netting when a square ball to Overton might have been a better option.

And Johnson collected Davidson’s header towards Overton on the stroke of half time.

Things got lively after the restart with Luque grabbing the opener three minutes in from a corner.

The Stones’ lead didn’t last long after Bognor loanee Madhani equalised with a lovely goal that curled into the bottom left hand corner under Johnson 120 seconds later. It was the midfielder’s third goal in three games.

Magee then saved a Pavey penalty and had to have treatment following a frenetic goal-mouth scramble after the ensuing corner.

Maidstone brought on Pattersen for Pavey on the hour mark and the sub proved to be the game changer.

Hutchings whipped in a decent cross in Chi’s next attack after a bit of trickery and then it looked like the home side might level again but Elokobi’s goal-bound header somehow bounced up on to the bar and a stretching Iordache was unable to get to the loose ball.

Magee pulled off two impressive saves but couldn’t deny Pattersen at the second time of asking and the visitors took the lead once more.

Kaleem Haitham replaced Madhani with 20 to go and another turning point came and went as referee Alex Blake brandished a yellow card to last man Raphe Brown for a heavy challenge on Davidson.

An incensed assistant manager Graeme Gee was directed back to the Chi dugout and Cody was booked for protesting too much.

Hutchings’ free-kick crashed into the wall and out for a corner which Pattersen headed away.

Deacon wrapped things up for the Step 2 side latching on to Booty’s slide-rule pass in the 75th minute.

And it might have been 4-1 moments later but for a smart stop from Magee to deny Pattersen.

Luque hit another attempt over and then drilled a free-kick to Jake Gallagher who also shot off target.

It was all Maidstone now and Hutchings did well to steer the ball back to Magee following a nice move between Booty and Corne.

The Stones had the ball in the back of the net with four to go but it was chalked off for offside.

Ethan Prichard, who’d come on for Jamie Horncastle, made a great run down the right flank only to deliver a disappointing cross.

There was still time for Magee to make another fine stop that a Chi defender eventually cleared with an overhead kick.

Corne missed a sitter in time added on, Overton might have got a consolation goal and Magee punched a Luque free-kick over for a corner which came to nothing.

So, Chi bowed out of the world’s oldest knockout competition to a National League South team for the second year running but, as with Tonbridge Angels in the FA Cup last campaign, their higher ranked opposition will know they were in a game.

Rutherford’s men are back in cup action at Oaklands Park on Saturday 25th September against Whitstable (Kick Off 3pm). 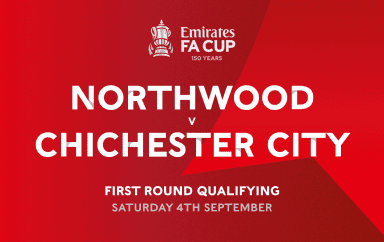 Chichester City To Face Northwood In The Emirates FA Cup