Chichester City bounced back from the FA Cup exit last time out to high flying National League South opponents Maidstone United in this FA Trophy qualifier thanks to goals from Corey Heath, Tyrone Madhani and a double either side of the break from in-form forward Callum Overton.

Miles Rutherford & Co made just one change to the starting XI that were beaten in the world’s oldest knock-out football competition marking its 150th year with Ben Pashley coming in for Lewis Hyde at centre back.

Whitstable, whose manager and striker departed mid-week, started the brighter of the two teams.

Liam Gillies, Ryan Flack, James Brown and George McIlroy linked up two minutes in only for Chi defenders to smuggle McIlroy’s cross away.

At the other end Rob Hutchings whipped over a delivery from the left but no one was there in the box.

Gus Barnes posed the hosts’ back four problems with his pace in the early stages of the game and got past skipper Connor Cody before sending over a cross that Pashley cleared.

Then a slip from Hutchings presented McIlroy with the game’s first real opportunity but he lifted his effort narrowly over the bar.

Hutchings wasn’t far off with an attempt on 13 minutes and then did well with a nice touch to control the ball and feed it back to keeper Kieran Magee.

The visitors forged another chance as Barnes picked out Harry Stannard but the No9 drilled his effort wide.

Rowlatt next found Iordache down the left and the Romanian sent the ball over towards Davidson lurking in the area who couldn’t get a telling touch.

Gillies and Stannard combined in Whitstable’s subsequent attack where Stannard fizzed one inches over the frame of the goal before Hutchings headed away a Barnes’ delivery.

Barnes, involved in a compelling duel with right back Davidson in the opening 20 minutes or so, got down the left wing once again and pinged over a super cross which Pashley managed to clear.

Horncastle then passed to Cody and the Chi captain opened up the away side’s midfield before finding Rowlatt who was clipped. Madhani took the resulting set-piece but it was too deep for a teammate.

Cody limped off with a calf injury just ahead of the half hour mark and Heath came on in his place.

Hutchings then sent over an inviting delivery that Overton couldn’t quite reach.

The visitors’ shot stopper gathered another by Iordache this time before Heath grabbed the opening goal of the game in the 39th minute steering home Hutchings’ corner.

And it was 2-0 two minutes later when Overton tucked the ball away after a slick exchange between Emmett Dunn and Davidson.

Dunn had the first chance after the break but pulled his wide shot without any real power.

Gillies and Barnes caused Chi a bit of trouble only for Heath to glance the final cross away.

Stannard then won a corner off Heath which Flack took and Davidson cleared.

Davidson broke forward, found Overton whose cross was turned out to Rowlatt but the ball wouldn’t sit up.

Skilful footwork by Hutchings got him into the Whitstable area and the Chi left back picked out Overton whose shot was too high.

Madhani did well to keep Hutchings’ cross in down near the corner flag and sent over one of his own only for Overton to head over.

The Bognor loanee then forced Eason into a smart save before the visitors went close with a Flack free-kick and a Tom Carlton effort from distance on the hour.

Scott Jones replaced Iordache and Chi added a third goal with a wonderful Overton strike on 64 minutes as the No9 bagged a second double in three games.

Matt Axell came on for Overton and there was a coming together of Dunn and Easton after Jones played the Canadian in.

Barnes went down in the other penalty box after a foot race with Pashley and Magee was forced into a rare save getting a glove on a Flack rocket before punching the corner clear.

Axell and Davidson then got Chi on the attack. Madhani was brought down but picked himself up and scored a lovely free-kick for his fourth goal in four games on the bounce.

Heath got on the end of a Hutchings corner but like Dunn headed off target.

Barnes might have grabbed a consolation late on. However, Magee beat him to the ball with the first chance and the Whitstable No11 fluffed his lines with the second one.

Madhani could have scored again after nice work from Jones, Axell and Dunn but defenders blocked his effort and had another go in the three minutes of stoppage time before Dunn glanced a header over in the last move of the match.

Coach Danny Potter said, “We’re delighted with the win but a little bit disappointed with how we played at certain points during the game. It took us a while to get into the fluid way that we want to play.

However, individually one or two of the boys stepped up at the right times and did well to get us in front with two late goals in the first half through Corey Heath from a set-piece and then a very well taken Callum Overton goal following an excellent Ryan Davidson delivery got us into a good place at the break.

Myself, Dabba and Miles spoke to the players at half time about what we needed to do tactically as a team to get past Whitstable.

We upped the tempo at times in the second half and started well.

There were two very good goals from Callum Overton after a ball from LLoyd Rowlatt and an excellent free-kick by Tyrone Madhani which put the icing on the cake of a 4-0 win.

We felt comfortable and slowed the pace down late on.

Sadly we lost Connor Cody in the first half with a slight calf strain and we brought Matt Axell on into the centre of the park in the second half, which helped, and we welcomed Scott Jones back after a bit of time away.

We’re fully focused on what we’ve got to do next.

We’re happy with the way things are going, despite the loss to Maidstone last week and now we’ve got three league games to focus on before the next round of the FA Trophy.” 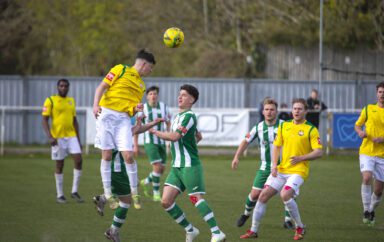