It took a penalty shoot-out, as it did this time last year, to settle the annual Steve Bernard Trophy with Chi keeper Kieran Magee saving Christchurch’s second spot kick and Eric-Georges Dellaud calmly converting his side’s final pen for a 5-4 win.

Callum Overton had put the hosts one up on the half hour after Ryan Pennery went over in the box, but Eder Batista’s 65th minute equaliser set up another dramatic finale.

Boss Miles Rutherford, back from ten days in Cyprus for his brother’s wedding, joined assistant manager Graeme Gee and coach Darin Killpartrick in the Chi dugout and Rutherford & Co made four changes to the XI that started against English Universities mid-week.

Worthing player Conrad Honore, who certainly caught the eye, lined up in midfield; Connor Cody returned at centre back; and Ethan Prichard and Overton also got the nod.

Chichester created a couple of chances in the opening minutes with Lloyd Rowlatt, who pulled the strings in the middle of the park for an hour, almost forcing a defender into an own goal only for his keeper to palm his misplaced header away.

The visitors might have gone in front in the seventh minute following a lapse from Ryan Davidson but the Christchurch forward fired wide.

Silky skill by Prichard won Chi a throw-in which came to nothing before Rowlatt lifted a pass to Prichard who shot narrowly off target.

Another ball from Rowlatt in the subsequent attack saw Pennery flagged offside and Prichard tried his luck from range on 15 minutes but the effort was always rising.

Next, Haitham forced the keeper into a save and the loose ball almost popped up to Davidson.

Overton cleared the first corner of the match in the 26th minute after Batista nearly took advantage when Haitham was dispossessed.

And then Christchurch’s No7 spurned the best chance so far when he ghosted in to a lovely cross from the right.

The visitors headed a follow up corner wide before Pennery earned a second arguably soft penalty of the week for Chi. Overton stepped up and slotted into the bottom right-hand corner to give the home side a 31st minute lead.

Spurred on by this Chichester won a catalogue of corners in the last five minutes or so of the half but couldn’t capitalise on any of these.

Prichard was denied by a decent stop from the Christchurch custodian two minutes after the re-start before a timely Cody tackle tidied things up as the visitors threatened.

Davidson then found himself in a foot race but the Christchurch player hit his attempt over the bar on 51 minutes.

Pennery went close at the other end and the visitors had one ruled out for offside moments later.

Super perseverance and a nice touch or two by Prichard opened up the Dorset side’s back line and Pennery played Overton in only for the keeper to save his inaccurate effort.

The hour mark brought about wholesale changes with Rob Hutchings, Ben Pashley, Honore, Haitham, Rowlatt and Prichard all being substituted.

Batista levelled things up sliding the ball home at the near post following a cross from the right before a teammate crashed an effort into the side-netting.

Chi rang another three changes after the drinks break – 21 players getting minutes here in all.

Oscar Johnston almost got a measured pass to Isaac Bello but the keeper was out swiftly to beat him to it.

Next, Tom Dinsmore found Bello who cleverly let the ball roll out for a corner when it nicked off a defender which the hosts wasted.

Johnston then nearly got to Dellaud’s delivery and found himself in the right place at the right time to clear on the line as Christchurch pressed in the last minute.

And so, the game went straight to penalties.

The visitors scored the first one and a precise spot kick from Dinsmore made it 1-1.

The next four takers all converted which left Dellaud, cucumber cool, to wrap it up with Chi’s fifth.

Tony Bernard, Steve’s father and founder of the Steve Bernard Foundation which has supported sporting projects in the South and beyond, and raised hundreds of thousands of pounds since its formation in 2006 after Steve, a Chi player and University of Chichester student, was tragically killed in a car accident, presented the trophy.

Chi face another Wessex Premier Division outfit when they travel to Brockenhurst on Tuesday 26th July (Kick Off 7:45pm), and then on Saturday 30th July face Newport in Ryde on the Isle of Wight . 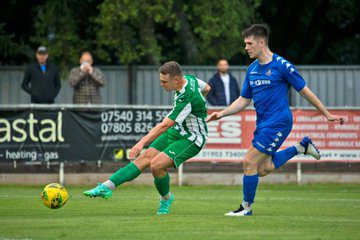 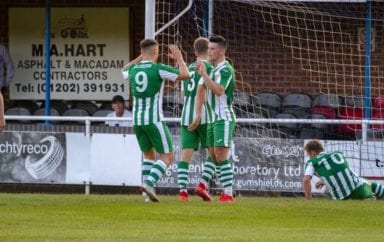