A Josh Clack first half hat-trick and a Scott Jones double after the break swept neighbours Pagham aside on a day of celebration at the Countrywide Gas Services Stadium that saw Chichester City presented the SCFL premier division trophy.

With Oaklands Park basking in the Easter mini heatwave a big crowd which came to show their support for the champions were not disappointed by the home side’s display.

Rob Hutchings, Ben Pashley, Gicu Iordache and Jones all returned to the starting line-up as Chi bosses Miles Rutherford and Graeme Gee rejigged things after the victory away at Arundel.

Pagham made four changes to the side that lost 4-0 to East Preston.

The visitors, who gave City a red-carpet guard of honour before the kick off, might have spoiled the party with the first opportunity of the match but Johan van Driel’s shot was gathered by Chi keeper Ryan Young.

Iordache then went close at the other end and moments later the Romanian set up Jones with a delicious ball, but again, the shot was inches off target.

Clack and Ryan Peake both had efforts blocked before Clack opened the scoring in the 20th minute with a goal befitting the occasion – a well-placed free kick which curled into the right-hand corner.

Five minutes later Clack doubled both his and City’s tally when he twisted and turned and drilled a low shot past Ryan Maskell.

The Chi No.7, impressive throughout, scored his third ten minutes before the interval after he shrugged off a challenge and finished clinically.

City were on the scoresheet again just after the restart. Iordache, who has become a fans’ favourite over the season, lifted a ball into the box, Maskell totally misjudged it and Jones was in the right place at the right time to chest the ball in for his 22nd league goal of the campaign.

Matt Axell blazed a long distance shot over the bar and Chi captain Conor Cody had an effort cleared off the line after a mazy, determined run from right back.

Ellis Martin, Harry Williams and Terrell Lewis came on for Hutchings, Rory Biggs and Kaleem Haitham and it was Lewis who got the assist for Jones’ second goal with a super pass the City striker tucked away with some aplomb.

Young was called into action midway through the second half, coming out to stop Howard Neighbour and Pagham’s No.9 wasn’t far off moments later.

Charlie Williamson then turned smartly but put the ball wide, in what was the visitors’ best spell in an otherwise one-sided match.

Ryan Peake and Lewis both had headed chances, but neither could convert, before Cody went close again late on with the last opportunity.

After the match the trophy was presented to Cody and former captain Dan Hegarty, and players and staff collected their league winners medals.

City have one more game, away at second placed Eastbourne Town, on Saturday 27th April (Kick Off 3pm). 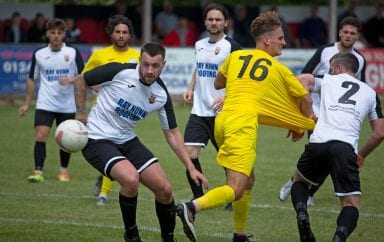 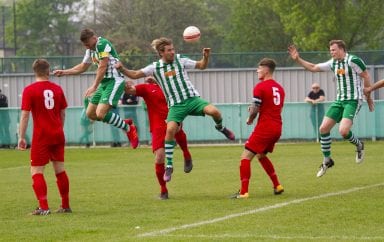