The club has been drawn against local rivals Pagham in the 1st round of Sussex Principle RUR Charity Cup.

The Lions are a much-changed outfit following the arrival of manager Bob Paine from East Preston in the summer.

The opened their SCFL season with back-to-back defeats against AFC Uckfield and Saltdean before eventually losing an FA Cup tie with Tunbridge Wells following a replay.

Memories of the last meeting between the two clubs are fresh for Chichester supporters as a resounding 5-0 win back in April was followed by the presenting of the Sussex Combination Football League trophy.

Summer signing Jamie Horncastle, who captained the Lions that day hasn’t had to wait long for the opportunity to face his former club for the first time since switching allegiances.

Manager Miles Rutherford will be hoping to go one better this season having reached the semi-final last term, eventually losing to 2-0 to Haywards Heath at Hanbury Park.

The match will take place at Oaklands Park with the date to be confirmed in due course. 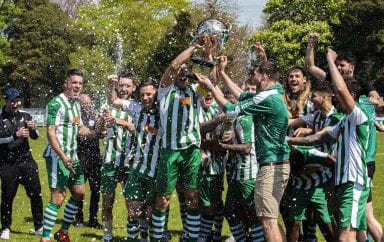