Tyrone Madhani’s second half equaliser gave Chichester a share of the spoils against Ramsgate – one of only five unbeaten Isthmian south east sides.

The visitors went in front inside 15 minutes through 18-year-old Ethan Prichard but Callum Peck levelled on the half hour mark and the Rams took the lead after the break from the penalty spot through stand-out player Josh Ajayi before Madhani got a touch to Gicu Iordache’s corner on 69 minutes.

There were several changes to the starting XI that featured last time out in the comeback win over Northwood in the FA Cup. Kieran Magee returned in goal and with Scott Jones away Callum Overton was given the No9 shirt. Ben Pashley started at left back in place of the missing Rob Hutchings and Emmett Dunn slotted into right back from centre midfield the previous week alongside Connor Cody and Corey Heath in the heart of defence. Lloyd Rowlatt, who played the first 45 for the U23s against Selsey, came into the middle of the park following an injury lay-off and Prichard was given the nod ahead of Madhani.

Former Crystal Palace academy player Ajayi gave Pashley plenty to think about down the right flank in the opening half and fizzed in the first cross of the game with sixty seconds on the clock.

Then a long kick from Magee was flicked on by Overton to Iordache but the Romanian’s return ball needed to have been more measured.

At the other end Ash Miller had a free header and a follow-up shot blocked before combining with Ajayi for a tame effort.

Referee Aaron Conn dismissed appeals for a penalty some eight minutes in when Ajayi went over in the box.

Next Prichard wasn’t far off and Ajayi, who seemed to be involved in everything the hosts did going forward, blazed one high.

The deadlock was broken on 13 minutes after Iordache had been given too much room and found Rowlatt with a super delivery. The Chi No10 was denied somehow but the ball fell to Prichard and he lashed it in.

Dunn might have doubled the lead four minutes later only to drive a rocket inches over.

Ajayi then picked out TJ Jadama who dragged his attempt wide and Denzelle Olopade and Mitchell Chapman hooked up but the final shot was high and wide.

Kaleem Haitham with two goals in two games couldn’t get enough power after a slick move involving Prichard and Rowlatt before Pashley found Jamie Horncastle with a clever set-piece only for him to head off target.

Heath gave away a silly foul on the edge of the box but the free-kick came to nothing.

Peck made it all square in the 33rd minute latching on to a cross from Ajayi and tapping home from close range.

Horncastle got a long talking to from Mr Conn for a tackle on Jadama and then the Ramsgate player almost reached a delivery from the left.

Peck weaved his way into the area only for Heath and Rowlatt to tidy up and then a poor pass by Haitham got Rowlatt in a spot of trouble and he was forced into a challenge that earned a yellow card.

Jake McIntyre’s subsequent set-piece was cleared easily enough and Overton won a corner for Chi in the last action before the interval.

Ryan Davidson replaced Pashley at the break and might have been on the scoresheet with his first touch of the game when he drifted in unmarked but couldn’t get a decent connection on Iordache’s corner.

Precise passing between Horncastle, Iordache and Prichard got Chi going once more and the visitors forced another corner which this time, and not for the last time, didn’t clear the first man.

Iordache, Haitham and Peck all followed Rowlatt into the ref’s notebook in an odd spell of the game.

Miller next linked up with Ajayi whose first touch was excellent but his effort just skewed away.

Miller had a go on 56 minutes, however, his shot ricocheted off a defender and was thumped clear.

Heath then gave away a needless penalty when he brought Jadama down in the box. Ajayi stepped up and converted with some aplomb.

Chichester lost Horncastle to a dead leg with Madhani slotting in to the middle of the park.

Jadama blew two golden opportunities to increase the lead – somehow missing from a super cross and producing a very good stop out of Magee.

Madhani got Chi back in the game with his first goal for the club, guiding an Iordache corner past Jake Russell in the 69th minute. It was the second match in a row where a substitute has come on and turned things around for Miles Rutherford’s men.

Ramsgate rang the chances too with Danny Lear and Callum Emptage replacing Ajayi and Chapman.

And then had a ghost goal denied with fans and players alike convinced the ball had crossed the line.

Magee pulled off a fine save moments later and Jamie Coyle headed wide.

City’s match winner up at Northwood, Lewis Hyde, came on for Heath with nine to go and Davidson did brilliantly to run back and win a goal kick that Magee was in no hurry to take.

The three minutes of stoppage time produced little drama and Chi, who would have settled for a point against a side that defeated Hastings 3-2 and Hythe 3-0 in their previous two league encounters, hung on for a draw with the Kent based team they beat 2-1 at the same venue in their first ever Step 4 season opener in 2019 thanks to two goals from Matt Axell. 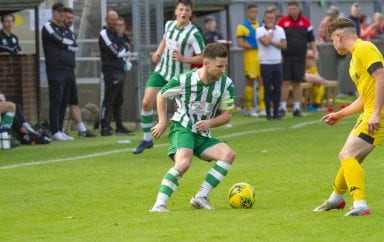 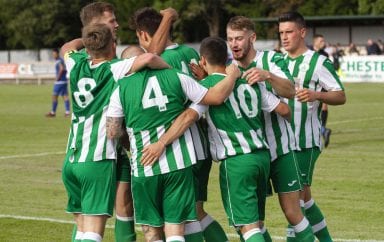